Mike Marino – affectionately known to millions of his fans worldwide as New Jersey’s Bad Boy – is one of the most loved comedians of our time. He has performed in every major comedy club, theatre, casino and event center from New York to Los Angeles and around the world. Mike has also shared the stage with some of the biggest names in the business.

Mike Marino was born in Jersey City, New Jersey. He entered the entertainment industry at an early age and has studied at some of the most prestigious acting schools in New York, the Herbert Berghof Studio and the American Academy of Dramatic Arts. Mike has appeared in over 200 national television commercials, including many endorsements and has received a Best Actor Clio Award Nomination. He has acted in many Prime Time soaps and television shows including: As the World Turns, One Life to Live, Becker, Nikki, Frasier and Party of Five. His film credits include Crooks, Pizza with Bullets, Hangin’ in Hedo and Steven King’s Lucky Quarter and Criticsized.

Adding to his great success in film, theatre, commercials and soaps, Mike Marino began touring the world performing and selling out at countless clubs, theatres and casinos. His stand-up material ranges from cutting edge observations of everyday life to his Italian family roots; which recently spun into a T.V. pilot called “Re-Constructing Jersey”. His comedic style has landed him guest appearances on The Tonight Show as a regular sketch player, The Martin Short Show, Canada’s Comedy TV, The Boomer Show, Wild Pitch, and Hand Held Comedy Radio. A clip of Mike’s appearance on Byran Allen’s Comics Unleashed earned him over 7 million views (and counting), which has led to his current web series “Marino 2016” – an original comedy based on Mike’s road to the White House and wise guy attempt to become the first Italian American President of the United States.

In the Fall of 2008, Mike Marino was inducted into the New Jersey Comedy Hall of Fame and in 2015 he won the USO Bob Hope Comedy Award for his many performances for the military. Mike has also been featured on numerous talk shows and has hosted some of the most prestigious award shows including The Beverly Hills Film Awards, Hoboken Film Festival, Montreal Quintus Film Festival and countless corporate events. Mike has been featured in the Just For Laughs Comedy Festival in Montreal, Canada, seven years in a row.

Mike Marino has a tongue like a razor and a heart of gold. He has the incredible ability to perform in any arena, big or small, and can cater his material for all audiences, from strictly clean to down and dirty. He has performed in hundreds of corporate functions for companies including AT&T, United Airlines, American Express, Paul Mitchell, IBM, Wella, Merrill Lynch, Sebastian Intl., Toyota, L.A.S.D., N.J. Asphalt Assoc., The City of Hope, OSIA, and the LAPD. Mike Has performed for numerous charities including Aids Project – LA, Haven House, Team earthworks, and the Eric Davis Cancer Fund. When Marino is not performing, he enjoys traveling and spending time with his family on the East Coast.

Tony Corrao is a vocalist born and raised in Brooklyn, NY. His love of music is evident in the passion he delivers with each of his performances.  His elegant sense of swing and style will transport you back to the era of high society and sophistication. The Times Square Chronicles said, “Tony Corrao has a gorgeous voice” and called him “a perfect choice for cabaret entertainment.

Tony has performed at many top jazz venues in NYC, NJ and Philadelphia with bands ranging in size from an intimate trio to a full 28-piece orchestra.  Tony was ​introduced to the Red Bank Jazz Arts Project in 2012, when he was selected as​ a cast member ​for the “Sinatra Birthday Bash” at the Count Basie Theatre. He has since performed numerous times with the Red Bank Jazz Orchestra under the musical direction of internationally known conductor, orchestrator and producer, Joe Muccioli.

On June 11, 2015 in Hoboken NJ, Tony competed along with 16 other singers for the coveted title of “Sinatra Idol” during the Frank Sinatra centennial celebration.  Tony sang and won 1st place with a relaxed and elegant version of “The Best is Yet To Come”

Tony works as a vocalist for the Jazz Lobsters Big Band, Hoboken-based Big Band Swingadelic,  The One More Once Big Band out of Clifton NJ and The Red Bank Jazz orchestra. He has performed many times at the Count Basie and Two River theaters in Red Bank and in NYC at Swing 46, The Blue Note and multiple times at the Jazz Standard. 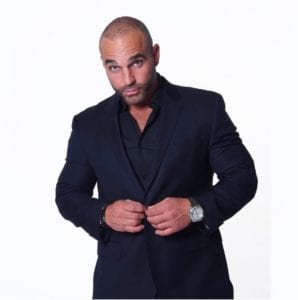 From the inner city of Paterson, New Jersey to real estate mogul, real husband of New Jersey and author Joe Gorga has learned how to build an empire from the ground up. In The Gorga Guide to Success, Gorga shows how to succeed in business, in marriage, and in life by following timeless, old school rules to living with passion, remaining humble, and never giving up. From his first job selling papers to his first forays into business, he learned from his immigrant Italian parents how to work hard, negotiate the best deals, and always keep “two feet in one boot,” which have helped lead him to real estate successAs one of the stars of The Real Housewives of New Jersey, Gorga now applies those same principles to his family, his marriage, and his unexpected stardom.

Joe is now ready to take on his biggest challenge yet – the world of Comedy. If you think Joe is entertaining on The Real Housewives of New Jersey wait to you see him live on stage.

Joe does not know how to fail and the world of comedy needs to get ready for this force of nature.