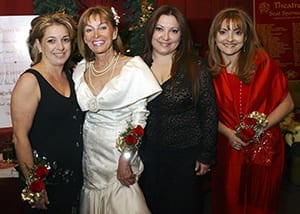 Mrs. Rosemary with her daughters

in 2004, Mrs. Rosemary Cappozalo with her daughters, Luanne Sorrentino, and Doreen Cugno, started a not-for-profit organization to save this historic theatre from being torn down. Mrs. Rosemary, a prominent dance educator, donated her life savings (over one million dollars) to the organization and “saved” the St. George Theatre. With the support from the community, business leaders, elected officials, and their board of directors, a white elephant was transformed into a beautiful, thriving, majestic theatre for Staten Island and all of New York City.

When they first entered the theatre, there was no electrical power, no plumbing, the bathroom ceilings were on the floor, large holes the size of their bodies where water was pouring through the ceilings, no orchestra seats, no carpeting, no stage lighting and no sound system. No heating system nor air-conditioning system working and only the birds and raccoons were finding comfort in the venue. Despite all the obstacles, the ladies had the theatre open in a few months. Restoration is still ongoing.

The re-opening of the theatre has given a major boost to the revitalization efforts of the St. George community. Through community outreach programs, tens of thousands of children, teens, and seniors have enjoyed a concert, special event, educational program / workshop, or tour at the St. George Theatre.

The St. George Theatre was inducted in Thirteen’s Community Hall of Fame for their outstanding programming and dedication to the restoration of the St. George Theatre. It has also received the Mayor’s Award for Achievement in the Arts from Mayor Michael Bloomberg.

The St. George Theatre Restoration Inc, is a 501(c)3 non-profit organization dedicated to the restoration of the historic theater and its development as a cultural and performing arts center for Staten Island and all of New York City by providing community outreach programs, educational programs and public performances!